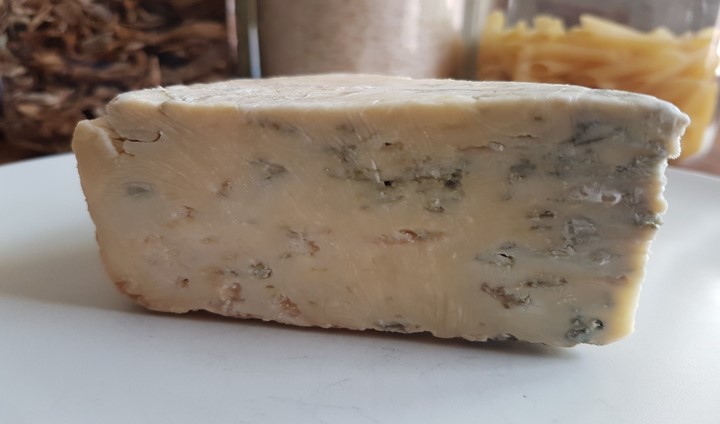 Originally blue cheese was started as an accident, but later on, it became a delicacy. Back in the early ancient years, a cheese maker forgot with a piece of bread in his cave. When he came back, it had developed some molds on it, turning it into what everyone today knows as the blue cheese, There is a lot of blue cheese, and they are distinctively different from the type of flavor to the textures. These textures and flavors can either be salty, creamy, crumbly, mildly earthy, or weepy. Despite the different flavors, the blue cheese must either contain black veins, blue, green, or gray dots of mold all over.

This cheese is used in various delicacies like it can be served with fruits and nuts. It can also be used as a flavor to add to soups, dressings, and sauces. Besides, it can be used by people making baked grains, meat stuffing, and cheese pasta delicacies to add flavor onto them. If you want to make it in various creams and soups, then it must be whisked. To anything that it’s added to, it brings out a very distinctive creamy aspect.

There are very many different types of blue cheese, and they vary from the kind of milk used to other factors. An excellent example of these other types of cheese includes; Gorgonzola, blue stilton, danablu, and double-cream blue cheese. Do not get confused with the spelling as bleu is the correct one as blue is because bleu in French refers to blue. When you get to Greece, and you want cheese, this is the one many people would recommend. It has some unique factors that people describe it for, some of which are that it’s soft, its white color, and its brined form. This cheese is used in very many dishes, like in desserts and appetizers, for example. It is made using milk from goats and sheep, which only feed to Greece local grass. It has a sharp and robust flavor, which, when tasted, you feel a creamy texture in the mouth. It is usually preserved in salty water and stored for two months, and then it’s ready.

Unlike the other cheese, this is the best to substitute for the blue cheese. This can be because of its health benefits like the addition of calcium and phosphorus in one’s body, which leads to the improvements of bones, or its ability to be used in dishes like desserts and appetizers. In many recipes, you can substitute bleu cheese for feta because of its strong taste and also because of its texture, which is almost the same and finally as it has a balanced flavor. Different from the other kinds of cheese, stilton can be described as a blue-mold cheese. It contains a rich, mellow flavor, and one can identify it physically because of its blue-green veins, which are narrow. Just like the bleu cheese, it is used to add to salads, pizza, or a slice of dessert cheese. This cheese is preferred by people who love its dominant flavor, and others on the centrally do not like it as they find it not appealing. Unlike the feta, it’s produced from cow’s milk that is pasteurized.

It’s a different cheese, so it can be easily identified from the rest as it has its blue veins seen from the center. It has the most effortless making process, and mostly it’s produced in two distinct varieties, which are blue and white. Each cheese has its own country that it’s popular, and in this case, Roquefort is popular in France. It is commonly and widely known as the French cheese and also as the cheese of kings and popes. It is a bit different from the stilton in terms of texture as it’s moist and easy to break, unlike the stilton. It is mostly famous for its richness in cream, a salty flavor for those whose salt is a specialty. It is made from sheep’s milk, but this time the milk is not pasteurized. To identify it physically, one has to notice the blue veins that are similar to that of the stilton.

It is also the right choice for substitution since it is used for salads and dressings. Different from the rest, it takes a long time before its ready, which is five months. The only difference is that of the taste, but the flavor and textures are similar.

It is also known as the Danish blue cheese, which is made from a cow’s milk, which is pasteurized, and like the above mentioned, it has blue veins on the sides of its white cheese. To be ready, it takes 60 days, and then it can be sold or eaten. It is very similar to the gornzola cheese because they are both made from cows milk, and they have the same qualities as being soft, having a crumbly texture.

Like the Roquefort, it is similar in appearance to the blue cheese and textures that are closely related, so it fits to be substituted. People mostly do this substitution out of preference.

This
is not different
from any other cheese that can be substituted for blue cheese. It is mostly produced in Italy in the northern sides. It contains blue veins also. It is used on pasta, soups, dessert, pizza, and even on risottos. It is also referred to as the blue cheese, and it’s made from milk from cows or goats. It takes only 50 days to be ready. It is purified and uses fresh unskimmed milk. It is used for milder flavors if you compare it with the rest of the other blue cheese. It is unique in the way it appears and the taste too.

Another replacement for the bleu cheese that you can use if you lack the bleu cheese in your recipe. The reason for this is not any different from the other type of cheese.