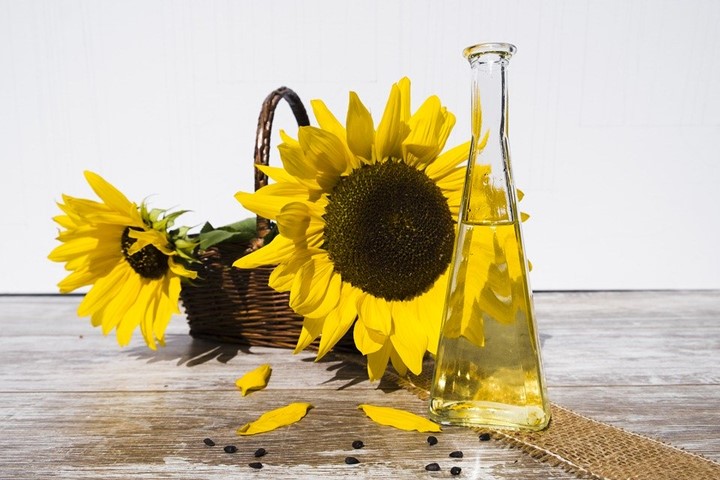 This is a type of oil that is extracted from the seeds of the sunflower. This oil has a lot of uses, which include; used for medicinal value, helps if one has constipation, and taking it may reduce one’s cholesterol level. For other people, this oil can be used to smear on the skin in order to take care of some wounds, and lastly, massage people use it as their massage oil. For people in the kitchen, however, use it as a cooking oil. As good and effective, it is to some people that sunflower oil is not healthy for people with high blood pressure since it increases their blood sugar and insulin too.

So for people who suffer or are likely to suffer from diabetes, this oil is not their best attractive. For people who do not use sunflower for one reason or another i.e., because of allergies and personal preference worry not for it has many other substitutes which most of them include olive oil, vegetable oil, canola oil, walnut oil, coconut oil, avocado oil, flaxseed oil and safflower among others. In addition, sunflower oil, mostly in cooking, is used frying oil, baking, roasting, and prepares food such as the French fries. The first and best substitute for sunflower oil is the olive oil, and reasons being the two are more compatible in terms of the health benefits and its easy availability. This oil, unlike the sunflower, has a high level of monounsaturated fats. Looking at its smoking point, it has 210 degrees Celsius, and this makes it best for cooking that requires low temperature. It is used mostly for salad dressings and also dipped in bread.

This a little bit different from sunflower oil has a fruitier aroma and a very tasty flavor. Therefore, it’s the best and first alternative that one should consider when thinking of a substitute for sunflower oil. If you are looking for the best oil for deep frying; however, olive oil should be on top of your list; this is because of how it responds to heat.

This is a type of oil that is used to deep fry vegetables and fish, and unlike olive oil, it does not have a lot of flavors. In addition, it’s also different from olive oil since it requires high temperatures to cook, and for that, its estimated smoke point is higher, which 220 degrees Celsius.

If your budget does not allow you to buy sunflower oil due to its high prices, one can opt to buy the vegetable oil as it’s less expensive. The benefits of the two oils, however, are different such that vegetable oil is used to promote cell growth while sunflower oil is used to improve the immune system of a person. Both the differences and similarities show best why the two fit to be substituted for each other. This is a type of oil extracted from flaxseed and from a plant known as Linum usitatissimum. This oil is very similar to the sunflower oil in terms of its benefits, where it is used as a medicine or for medicinal purposes, used for nutrition. Like the sunflower oil again, it is used in making salad dressing and also in margarine. For medicinal purposes, it’s used by people with heart diseases, high blood pressure, and those with a high cholesterol level.

Sunflower oil is different from the flaxseed oil since it has a higher smoking point, and therefore when one wants to use higher temperatures, he or she should use the sunflower instead of the flaxseed, which has a lower smoking point.

These two oils that are the safflower and the sunflower oils are too similar since, to begin with, they come from the same sunflower family. As a result of that fact, the two share almost all their benefits and uses, for example, both have medicinal values that is they help reduce or lower the chances of having a heart disease. Concerning the color, both are light and have little flavors. Another similar quality that may qualify them as substitutes it’s their richness in linolenic acid and polyunsaturated fatty acids.

Both of these oils are considered the healthiest oils, and for that reason, if you’re cooking with sunflower oil, you can use the safflower instead.

This is a type of oil that is neutral in flavor and is extracted from the rapeseed plant. It is important since it’s a source of omega-3 fats and also well known for its low levels of saturated fats. Unlike the sunflower oil, it’s cheap, and hence if one is tight on the budget, he or she can supplement the sunflower oil with the canola oil. It is used in baking just like the above-mentioned oils, can be used in grilling, and lastly, can be used to dress salads.

It has a lesser smoking point (204 degrees Celsius) than the rest, meaning it does not require high temperatures, and for that, many bakers prefer it, and those barbecuing too are not left behind. This type of oil has a distinctive character than the rest of the oils mentioned above, and this is its sweet, nutty flavor and aroma. In addition to the flavor, it is said to contain a very high percentage of saturated fat, which makes it higher than the rest of the vegetable oils. Regarding its smoking point, it’s a little bit high that it is 227 degrees Celsius, and because of this, it does not taste the food that is prepared with it. The dishes mostly prepared with this oil are curries and stir-fries, which are all motivated Asian dishes.

Unlike the sunflower oil, the peanut oil has a mild flavor and a high smoking point. This smoking point makes the peanut oil to be more suitable for deep-frying. The difference is not that big, and for that reason, both of these oils can be substituted for each other.

Substitute for eggs in meatloaf

Substitute for Milk in Corn Bread