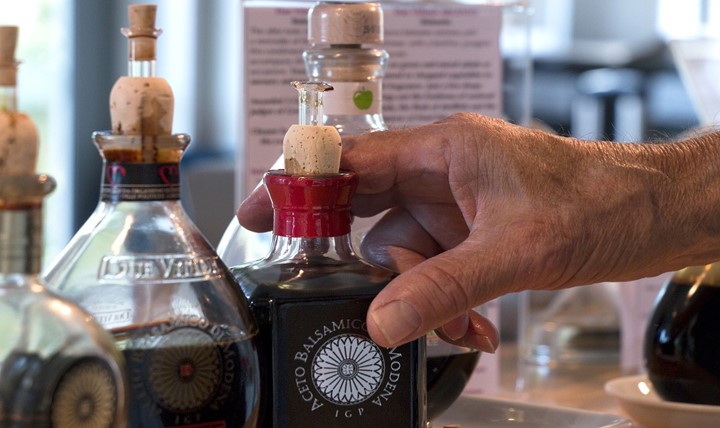 This is an Italian possession that has its royalty since the 1000 AD, and it’s made from the Trebbiano white grapes, which are squeezed in whole together with their seeds, skin, stems, and their juice. When making it, it requires a lot of labor, but the end product is worth the work. Unfortunately, this balsamic vinegar is very expensive, and very few people can afford it, and a good example is the bottle of Aceto Balsamico Traditional, which goes for $ 400.

This original balsamic vinegar is very expensive, and its taste is very distinct, and so for those who cannot afford, there are some substitutes that can sort you out. It is mostly used in recipes because of its richness in acidity and its sweet taste. It is used in salad dressings, sauces, marinades, and it makes steak, grilled fish, dips, eggs, and reductions. In addition, it is used in vegetables, pasta, poached fruits, meat dishes risottos, and grilled meat, among others. One of its health benefits is that it helps indigestion. This is one of the best substitutes where one just replaces the balsamic vinegar with one tablespoon of red wine vinegar together with half a teaspoon of sugar. Since balsamic vinegar has a unique taste, this substitute won’t duplicate the taste, but it will bring a quite similar taste. When making the substitute ensure you first dissolve your sugar till all its particles dissolve, and if it is taking long, one can heat, but remember to cool it down before using it as your substitute. The red wine vinegar has some health benefits which one may consider .These are; it helps reduce weight loss whereby it reduces the release of one’s hunger hormones, it also contains antioxidants which aid in the prevention of chronic related diseases, and it also contains acetic acid which is helpful in the prevention of blood pressure, inflammation, blood clots and lastly lowers cholesterol.

This is the number one substitute that one should look for in the market because of its ability to supplement balsamic vinegar in terms of taste and flavor, and lastly, because of all the health benefits one gets as a result of its use. This is one of the easiest substitutes to make, which is quite similar to the balsamic vinegar; the only difference is that it contains a ratio of 3 parts oil to just 1 part of vinegar. So the olive oil makes all the difference, and for that, it is mostly used for salads because it adds some sweetness. To make this substitute, however, one requires salt, freshly ground pepper, ¼ cup of balsamic vinegar, and ¾ cup of olive oil. Its health benefits are similar to the other balsamic vinegar substitutes, and just to mention, they include reduction of blood sugar, reducing cholesterol, losing weight, reducing congestion, and helping in healthy digestion.

It contains antioxidants, which are the ones responsible for helping lower cholesterol, the acetic acid, which aids in healthy digestion. It is fat-free and therefore contributes to weight loss. Different from the original balsamic vinegar, which ages for long that is between 25 years to 40 years, the vinaigrette ages for lesser time and for that it has a sweet and sour flavor and its color is lighter too hence making it’s the best substitute. This is a type of vinegar that is made from ale, which is fermented to later form the malt vinegar, which is mild, sweet, and with a complex flavor. It is also a vinegar that is got from stout grains of barley. It is normally used for salad dressing when it is mixed with olive oil and some fresh herbs and also used as a spice to add to chips and fish. In addition, it is also used for pickling, especially to the vegetables that may have a variety of flavors. It has several health benefits which some include; it’s used as a medicine for those individuals in pain and inflammation of arthritis, it helps to lose weight because of its acidic nature, and it also acts a food cleanser where it is added to fresh vegetables and fruits, and it removes any toxic pesticide which was used during growth of the veg’s.

Just like malt vinegar replaces balsamic vinegar, the vice versa is also fine since both can be used in preparation for fish and chips and also acts as a dipping sauce when both are mixed with olive oil and some spices.

This vinegar starts just like an apple juice, which is then added yeast which breaks down the sugar to form alcohol and through the fermentation process the alcohol is also converted to acetic acid which is now vinegar, and for that, the taste of the final product is sour with a very strong scent. It has a yellowish-orange color and also has a mild, fruity flavor. It has several health benefits such as improving digestion, preventing cancer and eye problems, and also helps to reduce or lower calories, among others. It is used for salad dressings, sauce, marinades, and flavored kinds of ketchup.

For it to be a very good substitute, you have to combine it with sugar just like the red wine vinegar, the ratio of the two has to be a tablespoon of apple cider vinegar and half a teaspoon of sugar. This is not the first choice for your substitution, but if it’s available and you don’t have the balsamic vinegar, you can use it, having in mind that the lemon juice is not as strong as any vinegar and its taste is sour. Just like the balsamic vinegar, though, it can be used in foods like; fish, meat, in fried recipes, steamed vegetables, salads, and sauces. The flavor and taste will be different, but close to the original one. It has health benefits like the rest, and these are; improvement of digestion, weight management, cancer prevention, and also provides with vitamin C.

Lemmon juice is a good substitute because of its acidity closeness with that of balsamic, which means their effects in foods is quite similar, but the flavors differ.