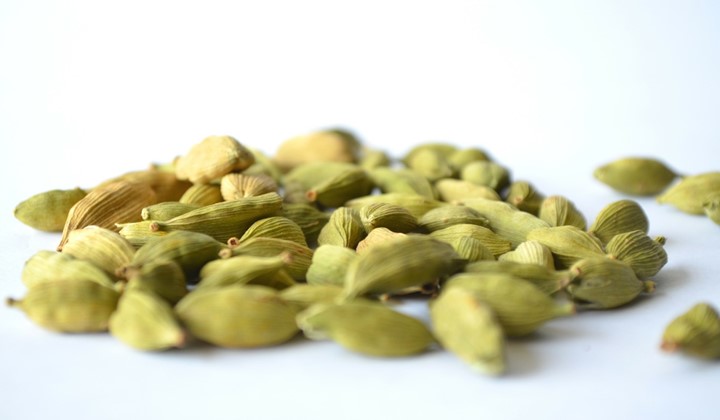 Cardamom is a spice used in different dishes, and it’s extracted from a seed pod of different plants that are of the ginger family. It is majorly used in Indian, Arabic, and Swedish cuisine, but naturally, it comes in two varieties or types. The types are black and green cardamom, where the green one is known as the authentic cardamom.

For you to use it, you must use the full pods and seeds, or you can choose to ground or buy one that is already ground. It is used in many kinds of dishes because of its spicy, minty, citrusy, and herbal qualities, as well as it is complex and its high sweet scent. Different from the two types, however, is the white cardamom, which has little flavor compared with the other two. In India, they use it for cooking basmati rice and some other curries, while in the Middle East, they use it for spicing up dessert.

Due to its herbal nature cardamom has the following health benefits; it helps to lower one’s blood pressure, and this is as a result of the antioxidants contained in cardamom, it contains compounds that may help fight cancer, like many spices that have medical importance, cardamom contains compounds that can fight inflammation and hence it helps prevent chronic diseases. It is important to note that it’s the third most expensive spice worldwide.

As mentioned earlier, cardamom has a complex, unique flavor, which is a combination of herbal, woody, citrusy, fruity, and nutty all at the same time. It is for that reason that its substitute has to be a combination of two complex flavored spices. Cinnamon contains woodiness, and cloves have a very high intensity, which combination brings out a similar flavor like that of cardamom. To get the right amount for substitution; however, one has to use half teaspoons of each substitute to complement one teaspoon of cardamom. Both have health benefits similar to those of cardamom, and they include; they contain antioxidant, have inflammatory properties, they reduce cholesterol and prevent chances of heart disease.

Substituting cloves and cinnamon for cardamom does not bring the exact same flavor, but slightly different, but mainly, other benefits are quite the same. These two are mostly used in meat and seafood dishes.

Cardamom is got from pods that come from a plant of a ginger family, and for that, the gingerly qualities are there. Combining cinnamon and ginger brings out a tad mild flavor, which makes the two best for baking. They also bring out the woodiness still contained in the cardamom and also a warm spiciness. In terms of their health benefits, they help prevent diabetes. Ginger alone helps with digestion, nausea stomach pain and also reduces risks of heart disease. For cinnamon, it helps improve dental health, slows down inflammation, and also lowers the chances of cancer.

These substitutes cardamom in rice, meat, and savory dishes. It is imperative to remember to replace a spoonful of cardamom with half spoonful of both ginger and cinnamon.

Nutmeg contains the same woody and fruity elements as cardamom, while cinnamon has the woody characters, and hence the combination of the two makes a very good substitute. One can substitute equal amounts of nutmeg for cardamom, but that does not mean the taste of the two can be duplicated since cardamom has a very distinct flavor. These spices are used in sweetmeats and baked desserts. Cinnamon and cardamom are different in terms of flavors, but when it comes to sweetness, they are similar, and that makes them good substitutes. Just like the nutmeg, you can substitute cinnamon equal parts to those of cardamom in your recipe; however, the combination of cinnamon and nutmeg brings out a complex flavor, which is sweet, spicy and little citrusy.

Nutmeg has health benefits such as; helping in digestion since it contains some essential oils that reduce gas. It contains minerals that help in blood circulation and helps to maintain blood pressure. Cinnamon, on the other hand, lowers blood sugars, reduces the risk of heart disease, and contains antioxidants.

Allspice is a very good substitute because of its spicy, fruity, and citrus qualities, but it is the stronger one. It has an aroma that smells like a mixture of many spices like cinnamon, cloves, ginger, and nutmeg. It is prepared from unripe berries that are harvested and then dried where one can choose to use it as a seed or ground it. In some parts of the world, some people call it by its other name, pimento, since the Spanish had mistaken it for black pepper, which they refer to as the pimiento. It is used to substitute cardamom in curries, meat, and fish dishes. For substitution, use a half teaspoon of allspice for a teaspoon of cardamom.

It is still a good substitute because of its medicinal or health benefits, which include; it relieves pain, kills bacteria and fungus, and lastly eases stomach upset. It also contains other medicinal compounds such as eugenol and quercetin, Gallic acid, and ericifolin. This is a type of a spice that is produced by a coriander plant, which is from the parsley family. Coriander as a whole is the seed, stem, leaves, and seed, but the one mostly used for spice is extracted from the seeds. It has a lemon flavor, and a floral aroma, and these seeds are normally ground before they are used as a spice. It is used to prepare soups, stew, vegetables, and meat dishes. Like the other substitutes, it also has a lot of health benefits such as; it helps reduce constipation and also helps for stomach problems. It has an aromatic sweet taste, which also has an element of citrus, which makes it more likely as complex as the cardamom. In addition, coriander also adds a nutty flavor to one’s dish, and it is used for both the sweet and savory dishes.

For substitution use, the same amount of coriander sees as cardamom, especially when preparing the savory dishes. For other dishes like sweet dishes, start with just half coriander seeds and then add it later at your own preference.