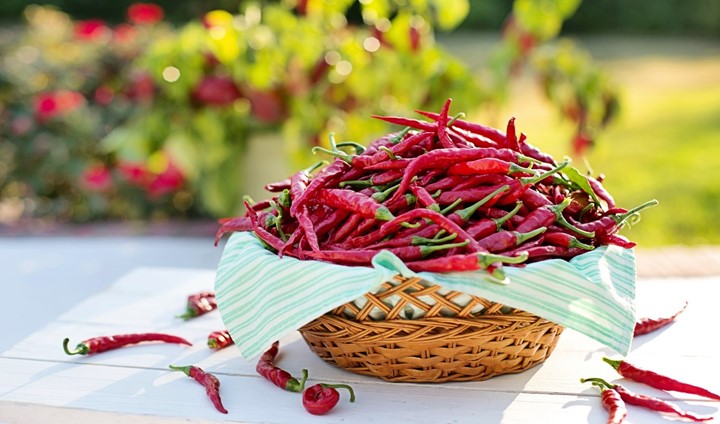 Cayenne pepper is a form of chili pepper which is well related to jalapenos and bell pepper. Before spreading to the European region, it was originally produced in South and Central America. Apart from being used as a spice for many dishes, cayenne peppers are used for medicinal purposes for a long time. The capsaicin compound gives it the hot taste and medicinal properties as they contain antioxidants that are important for the user’s health. They contain different ingredients, including fiber, protein, Vitamins, manganese, and potassium. The health benefits that come with using cayenne peppers include; healthy digestion, boosting metabolism, reducing hunger, lowering blood pressure, and reduces the risks of getting cancer. They can be used for different foods like eggs, marinades, and fries. When sliced, they can be added to salads. They are commonly known as the bird’s eye and can also be referred to as Congo chilies, African devil, or Thai dragon peppers. The names depend on the regions, although its place of origin is Thailand. They are easy to grow, and the plants are quite productive. They appear in different colors depending on the maturity level. Thus they are usable at any stage depending on one’s preference like Green, purple, or orange and red when mature. They are used while sliced, whole, diced, chopped, or seeded, which depends on the use.

The heat of Thai peppers is much higher than that of cayenne peppers, which in Scoville heat units is ranging between 50,000 to 100,000. They have a fruity, spicy flavor. The peppers are used for various dishes, including vegetables, chicken soup, fish, and can be added to salads, sauces, curries, and marinades. They are common in Malaysia, Indonesia, Vietnam, and Thailand for cuisines. Just like the cayenne peppers, Thai peppers have health benefits. They are rich in antioxidant ingredients and serve as a source of Vitamins A, B-6, and C. Also, they contain copper, potassium, capsaicin, which have many health benefits and fiber. They help in boosting the immune system, proper digestion, enhancing proper vision, and higher production of collagen.

Compared to the Cayenne peppers, Thai peppers produce more heat than that of cayenne. They are both used for the same dishes and are added to salads; the ways in which they can be used also is almost the same (whole, sliced). The health benefits rhyme considering the capsaicin compound they contain. Tabasco peppers have their origin in Mexico and are best known for being used for Tabasco sauce and peppered vinegar. They are red in color when well ripened with the Scoville heat units ranging from 30,000-50,000. Before ripening, they appear green, which transforms into creamy yellow, then orange, and lastly bright red. One can pick them while green though they are preferred when well ripened as they tend to be fruitier/ juicier and sweeter. They are mostly used in making the tabasco sauce, fresh salsa, and when dried, they can be used to make spicy chili powder—putting its overall spiciness into consideration, it’s more like the cayenne pepper but hotter than a jalapeno. Quite a good number of chilies are usually dry inside containing a white membrane that holds the seeds while tabasco peppers contain juice from the inside. The juicy nature makes it very tasty and hot, apart from Mexican dishes, it’s used when preparing eggs, salsas, and meat.

Tabasco sauce does not contain fats and calories. It lacks some nutrients like fiber, protein, calcium, iron, or Vitamin C, but on the other hand, it can be considered in diets as it does not contain fat. The health benefits include healthy digestion, aiding in weight loss, reduces the risks of getting cancer, relieving joint pains, and reducing psoriasis.

Both cayenne pepper and tabasco pepper are medium-hot. However, the juicy nature of the latter sets it apart, even though both can be used for the same dishes. The ingredients or rather compounds contained vary as tabasco lacks fiber, proteins, and calcium present in cayenne pepper. It Originated from Mexico. They maintain a moderate level of heat with a range of 2,500- 8,000 Scoville heat units. Fresh peppers can be diced, chopped, or sliced depending on their purpose. When smoked after drying, they are known as chipotles, and if grounded, they are used as a spice. They are used for salsas, sauces, soup, and various dishes. They contain fiber, iron, manganese, potassium, copper, magnesium, and Vitamins. They contain capsaicin, which aids in digestion, pain-relieving, reducing hunger, boosting metabolism, and managing blood pressure levels. This is a powdered spice from dried and ground varieties certain pepper. It is indifferent colors like orange, yellow, and red. It’s available in various varieties, with the hottest being the Spanish and Hungarian. It’s mainly used in preparing stews and rice. It is rich in minerals, vitamins, and antioxidants, which have the following health benefits; reduce inflammation, risks of getting cancer and heart disease, are lowered, promote cholesterol levels, overall blood health, and lowering insulin levels.

Unlike cayenne pepper, paprika is available in different varieties that have different heat levels. They have rhyming health benefits, and the dishes they can be added to are similar. Peppers from the capsicum annum family are mixed to make red pepper flakes. The mostly used pepper in making this is cayenne pepper. They are different from chile flakes, which contain a uniform color unlike that of red pepper flakes, which will have lighter- colored seeds. They are ideal when used in preparing sandwiches, sausage, soup, vegetables, pizza, chowders, and spaghetti sauce. They can be combined with lime juice, coconut milk, and lemon juice. Their health benefits include metabolism boost, reduced cancer risks, a strong immune system, and digestion.

Red pepper flakes are more like cayenne pepper as the latter is commonly crushed to make the former. The ingredients contained are the same, thus have similar health benefits.