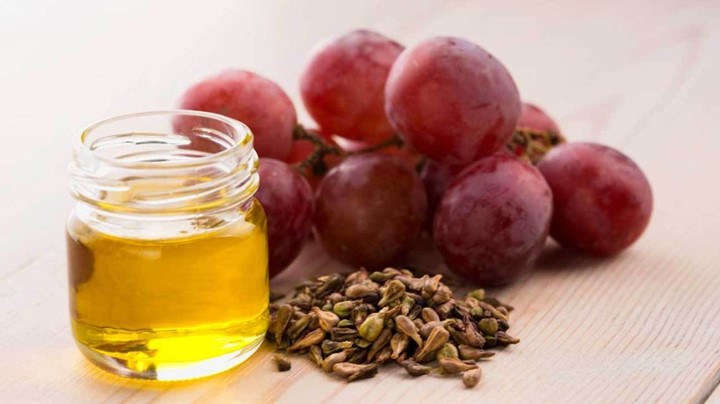 If you ever find yourself where you need a substitute or an alternative for grape seed oil then we’ve got plenty of suitable substitutes that can host your needs. Some of them are best served cold – added to salad dressings and vinaigrettes, while some works well at considerably high temperatures, e.g. baking cakes or roasting vegetables. There are plenty of Oils that can fulfill your need to replace Grapeseed oil and each one of them has its own unique taste, aroma/Florence and use.

But before we get to the proper, easily available and best in taste and Aroma substitutes for Grapeseed oil, let us see what Grapeseed oil is? What does it do? And what exactly it is made of?

Grapeseed oil is quite a versatile, appropriate priced sort of vegetable oil that’s generally used for stir-frying, sautéing and baking. It has got a very clean, neutral taste that doesn’t overshadow the flavor of other ingredients present in the dish, making it an excellent material for salad dressings. For Centuries, winemakers were wasting a ton of stems, pulp, seeds and skin of the Grapes. Cause after extracting wine from the Grapes those were pretty useless, now these winemakers can extract oil from these rotten Grapes after taking all the essentials required for winemaking.

Here we’ve got a list of Natural products that can replace Grapeseed oil for you. Avocado oil is the first one to popped-up on our list, it is not just a substitute for Grapeseed oil but also a very vital and significant oil that is widely used by millions of people on the globe. Apart from Aroma, it has got a lot of benefits when it comes down to the health of its user. Avocado oil contains a high percentage of Vitamin E and antioxidant elements that can be very fruitful for skin because these elements can enhance the production of new skin cells.

Moreover, the Avocado oil can be a useful beatification product and it can also be used as an Anti-inflammatory liquid. The oil also has a huge amount of Vitamin A which is very essential for the body to work normally.

With a smoke point of 271 C degree, it is one of the best cooking oil there is. With such high Smoke point, it can cook food very quickly without even absorbing too much oil. Expanding its use, Avocado oil is also used in deep frying dishes like the French fries, meat and onion rings. The next one on our list is the Almond oil. It is another source of vitamin E, even though it contains vitamin B, monounsaturated and linoleic fatty acids.

Almond oil is extracted from sweet almonds, the almond oil used for cooking is usually made from sweet almonds that provide a smooth, buttery flavor, with just a nutty taste. Almond oil can also be used as a finishing oil for salads, fish, and vegetables. It is also used as a grapeseed oil substitute in baking as it adds a toasted flavor to cookies, muffins, and cakes.

When it comes to the smoking point, almond oil stands just a little higher than Grapeseed oil itself with a smoke point of 216 C degrees, The third position on our list is occupied by the Canola oil. It is chemically extracted from the grapeseed plant. It can be a great replacement for Grapeseed oil, when it comes to cost, it is a lot cheaper than grapeseed oil itself and it is rich in both omega fats and monounsaturated. Given that canola oil has the same origins as grapeseed oil and can be adopted into any recipe, it is the best substitute for grapeseed oil.

However, these benefits are often overshadowed because of the production of canola oil which is through chemical Extraction.

It is an excellent alternative for grapeseed oil especially when it comes to baking. It has a light flavor just like grapeseed oil, and with the smoke point of 200 C Degrees, it is an ideal substitute for Grapeseed Oil. If you’re looking for something that can replace the need for Grapeseeds oil and could also save some bucks for you, then corn oil should be your one and only choice.

Corn is not chemically Extracted rather it is extracted from the germ of the corn plant itself. Due to its high availability, it is one of the most inexpensive Vegetable oils in the world.

Just like grapeseed oil, it has a neutral flavor and it also has a high smoke point of 210 C degrees making it ideal for deep frying. It is also a key ingredient in some margarine. Unrefined corn oil is very high in fat and calories and is considered less healthy than olive oil or almond oil. Using a cold-pressed version of corn oil will be healthier as you can benefit from the polyunsaturated fats and monounsaturated that help balance cholesterol levels. The Fifth substitute on our list is Olive oil, it’s another kind of oil that you can use for baking purposes. Oils used for baking shouldn’t have a strong flavor or aroma and that’s why olive oil is a great grapeseed oil substitute. It has a very light and smooth taste and has a high smoke point of 210 C degrees.

It is produced by grinding olives into a paste and separating the solids from the oil. Just like grapeseed oil, like grapeseed oil it also has monounsaturated fats and vitamin E making it an ingredient in hair, skincare and cosmetics products. It can also help reduce the risk of heart stroke.

With its light texture, it is also perfect as salad dressing, if you’d also like to make mayonnaise, you can replace grapeseed oil for olive oil due to its emulsifying properties. The sixth one on our list is peanut oil, there are various processes used to get peanut oil. Refined peanut oil has the allergenic parts of the oil removed, this is the most commonly used type used by restaurants in cooking fried food. Cold-pressed peanut oil is a low-heat process whereby peanuts are crushed and oil is forced out. Gourmet peanut oil is unrefined and roasted, giving a deeper flavor to the oil. Because of its 230-degree smoke point, it’s amazing to use for stir-frying vegetables and other Asian-inspired dishes.

The safflower plant thrives in dry conditions and the oil is extracted from the seeds of the safflower plant. Similar to corn oil and peanut oil, it has a 265 C degrees smoke point, great for sautéing, frying, and searing. The petals are often used to substitute saffron and give color and flavor to rice dishes. Safflower oil itself is almost flavorless and enhances the taste of your dishes, salads, and dressing.

It has the same health benefits as grapeseed oil and is also used in a few skincare products. If you are allergic to chrysanthemums, marigolds, daisies, and the like, you might want to pass on this one and use the other alternatives in this list.

Sesame oil is one of the healthiest alternatives to vegetable oils. It has impressive amounts of vitamin E, vitamin K, polyunsaturated fats, and is filled with antioxidants. It also contains calcium, magnesium, iron, and zinc. It has a high smoke point of 210 C degrees so it is a good alternative to grapeseed oil when making dishes cooked at high heat. It should be used sparingly because it has a pungent taste and aroma, unlike grapeseed oil. It has a 230 C degree smoke point, great for deep frying chicken and meat, and it can also be used as a salad dressing because of its neutral flavor. Last but not least on our list is Walnut oil, just like almond oil and avocado oil, walnut oil is best used for salad dressing, it doesn’t have a high smoke point, so it’s best added as finishing oil.

It contains high levels of omega-9, omega-6, omega-3, that helps improve blood circulation, reduce the risk of heart disease and it has phytonutrients that are an excellent source of selenium, phosphorous, zinc, magnesium, calcium, and iron.