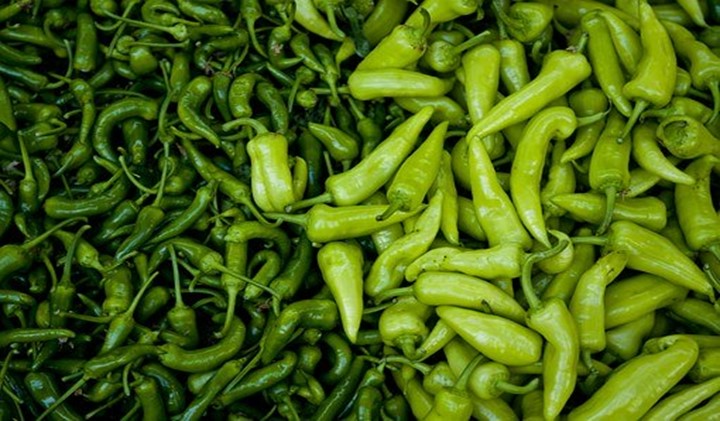 Green peppers are green in color. They are medium-sized, bell-shaped, and brittle skin with a texture that is fleshy. These are the unripe versions of the other types, which once ripe they can either turn orange, red, purplish-brown, and yellow. In some cases, it has been classified to be a vegetable instead of a spice because of the moderate pungent flavor it provides. Apart from its use in the preparation of dishes, green peppers come along with several benefits. Green peppers are great antioxidants as they are rich in Vitamin A, B, and C, good for relieving pain and disorders associated with bones including rheumatoid arthritis, beneficial to asthmatic people, and reduces the risks of cardiovascular problems. The peppers contain dietary fibers that aid in digestion, with the high levels of calcium assisting in strengthening bones.

This is the best substitute for green pepper, which is of Mexican native used to add flavor in meals. It is a variety of chili pepper. While fresh, they are green in color and have a mildly sweet flavor, which is hotter if they are used when ripe. The heat units, according to the Scoville scale of poblano pepper, ranges between 1,000 to 1,500.

They are rich in fibers and contain components like Potassium, Iron, fat, and different vitamins. Although the side effects of poblano pepper consumption remain unclear, they have several health benefits considering they are rich in nutrients. The health benefits include; reducing cancer risks, they have antioxidant compounds, assist in pain alleviation and immunity boost. They can be added to sauces, rice, beans, corn, chilis, or taco meat while some people enjoy them raw. While preparing the pepper for dishes, they should be cut into halves before removing the seeds then slice the halves into smaller pieces.

Green peppers are larger than poblano pepper, although they appear the same in color. While being used during food preparation, they both have a mild flavor. They have some nutrients that are common, and both have quite a good number of health benefits.

The name California chile has been used to refer to Anaheim pepper. It is a type of Mexican chili pepper and can be termed as New Mexico pepper, where it originated. Anaheim peppers are categorized in the class of Capsicum annuum. The peppers produced by New Mexico are hotter compared to Californian ones. On the Scoville scale, the Anaheims heat maintains the range of 500 to 2,500; thus can be taken raw, but for typically produced Mexican Anaheim peppers, they have a range of 500 – 10,000 units. The higher heat units suit the traditional Mexican dishes. Compared to poblano peppers, the anaheims are narrower, medium-sized, curved pods, contain fruitier flavor, and the color is lighter green. Once cooked, it provides a sweet, smoky, tangy flavor.

The peppers are rich in vitamins A, B6, C, and K as well as fiber and potassium; thus, just like the green peppers have both nutritional and health benefits. Just like poblano pepper, these can also be used raw as well as when cooking, including baking, roasting, and grilling. Among the health benefits it comes along with include; weight loss due to the low-calorie level, bone and tissue health, formation of red blood cells due to the number of minerals contained, and digestive health. It also contains capsaicin, which is good for conditions like diabetes, heart disease, and cancer. Banana pepper is bright yellow in color, but once matured, it turns orange, red, or green. They have a slightly tangy-sweet taste hence not considered as hot pepper. It’s also called the banana chill or yellow wax pepper. It’s commonly used when preparing pizza, on sandwiches, Greek salads, or cheese. The Scoville scale heat units’ range is from 1-500. Banana peppers contain vitamin B and C, dietary fiber, and potassium. The health benefits include; reducing gout, prevent arthritis, brain health, and healthy digestion.

The heat units of banana pepper are much lower than those of green pepper though they contain common nutritional compounds resulting in health benefits.

This is a type of sweet pepper that mostly known and used in Cuba, Puerto Rico, and in the Dominican Republic. It is a suitable substitute since it has a sweet, mild heat and a taste that is flavorful. It is mostly mixed with salads and pizzas. They normally come in green and yellow colors and later turn red after they are fully mature. It’s a bit different from the green pepper due to its better flavor or rather its more flavorful taste. On the appearance, cubanelles are thinner than the green peppers. Despite the slight differences, however, cubanelle is a very good substitute for any green pepper.

Just like the Anaheim pepper has a close flavor with the green pepper, so is the cubanelle. Apart from the flavors, this pepper has some health benefits such as the gain of vitamin C and A and fundamental for the health of one’s heart. They are also important for their high potassium, manganese, and folate, among others, hence if you are looking for a green pepper substitute, this pepper can work too. Essentially, these are green peppers that can mature and ripen. For the red peppers, the time required for production is more than that of green pepper as they must ripen fully. They provide a sweeter and fruitier flavor; hence they are more expensive. When considering ripeness of peppers, yellow pepper is in the middle, although some types maintain this color even when matured.

The red and yellow peppers take more time to grow as compared to the green peppers, which explains their differences in prices. The nutrients contained in all the peppers have similar health benefits.