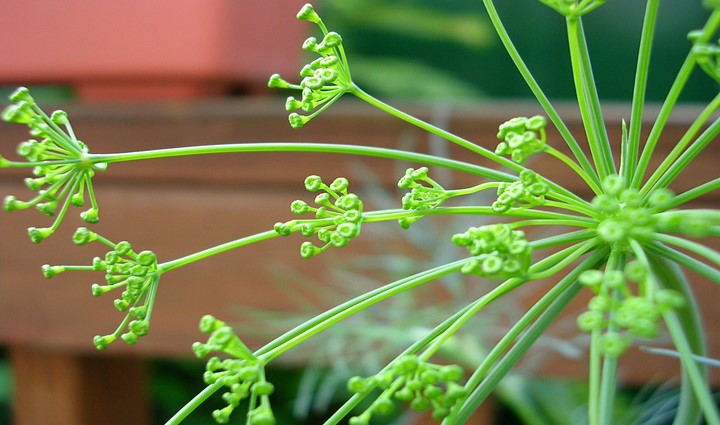 Dill weed, also known as baby dill, is a delicate aromatic herb that is much loved for its slightly sweet and lemony taste. It is a very popular spice and garnishes for recipes with potatoes, yogurt, and seafood. Dill belongs to the parsley (carrot) family, with other aromatic herbs such as parsnip, anise, celery, coriander, chervil, and caraway. Records of its culinary use date back to the 17th century, when it was also believed to chase away evil spirits.

Today, dill is popular in many homes for its delicate flavor and aroma. It can be used either fresh or dried with similar effects. However, it is not always that you have some dill lying around. Fortunately, you can easily substitute it with similar spices in your recipe.

This magical spice also has numerous benefits for the body.

It is also popular in Ayurvedic medicine for the treatment of stomach problems, coughing, hemorrhoids, genitals ulcers, liver complaints, and many more.

Here are the 5 best substitutes for dill weed, both fresh and dried. Fennel belongs to the same plant family as dill, and they are alike in many ways. For one, they look almost similar, with delicate feathery fronds and emerald-green color. If your main purpose for using dill is as a garnish, then fennel is the perfect substitute.

If, however, you want to substitute its flavor, it will not be the same. Dill is herbaceous and subtle in flavour, while fennel is stronger and has a distinct liquorice and anise tone. Thus, the two have quite different flavor profiles. You can substitute one for another, but they just won’t taste the same.

Given that dill is mostly used as a garnish, fennel is a perfect substitute due to the almost identical looks. Tarragon is the best replacement for dill when it is being used as a spice. There are two types of this grass-like herb: the Russian variety and the French type. Cooks and chefs prefer the latter because it is stronger in flavor.

Tarragon is more aromatic than dill, with a unique blend of liquorice, fennel, and anise flavors. You should substitute similar amounts of tarragon for dill unless you’re replacing fresh dill with dried tarragon. In such a case, you should adjust the ratio and use a teaspoon of dried tarragon for every tablespoon of fresh dill. Tarragon is more heat-stable and should be added to the pot much earlier than you would dill. The health benefits of tarragon include:

Tarragon is the best substitute for dill weed when it is needed for flavour. While it is stronger in flavour, it works very well with dishes like seafood and salad dressings. Sometimes, you just need that specific dill flavor and are tempted to use dill seeds instead. However, these are more pungent than the leaves and have a slightly bitter edge. You can use caraway or celery seeds in their place, which are more subtle and can better replicate the delicate flavor of dill weed. When using caraway or celery seeds, replace them measure for measure as would with dill seeds. Between caraway and celery seeds, the latter has a somewhat more subtle flavor.

Caraway seeds are also very popular for their health benefits.

Caraway and celery seeds have an almost identical taste to dill weed, even more so than dill seeds. If you do not have fresh tarragon or fennel, they are the next best thing when the flavour is your main goal. Parsley is perhaps the best-known member of the carrot family and is available all year round. That means that it is the dill alternative which is most likely to be available in your garden or in the local market.

Parsley lends a gentle taste to your dish, bringing out the other flavors rather than overpowering them. It is very popular with meat, fish, and poultry recipes. As a dill substitute, parsley works because it imitates the subtle notes of dill, though not quite as well. It is also a great dill substitute for garnishing. You can use fresh parsley in similar measures as you would with fresh dill. Apart from its excellent culinary qualities, parsley is also very good for your body.

Parsley is an excellent substitute for dill due to its mild flavours, and also because it is great for garnishing. While it neither looks nor tastes exactly like dill, it is still a superb herb to use in its place. Thyme makes a good substitute for dill when the dish involved in fish, poultry, or other types of meat. It is mostly useful when used to marinate the meat before cooking or grilling, but is also great for eggs and custard. Thyme is already very popular in French and Italian cuisine due to its highly aromatic flavor. There are many types of thyme, but the best is French thyme and lemon thyme. It should be added into the pot early on into the meal as it takes some cooking. As a substitute for dill, thyme should be used sparingly because it is much more powerful. It has many health benefits, including:

Despite the fact that is much stronger in flavour, thyme makes an excellent substitute for dill in long-cooking meals. This is especially true with meat dishes. Other similar spices such as basil and rosemary can also be used.Dill is a popular spice and garnish in many dishes. It is part of the large parsley (or carrot) family, and can usually be used interchangeably without a great variation in flavor. Other spices can also be used in similar dishes, depending on the end result desired.