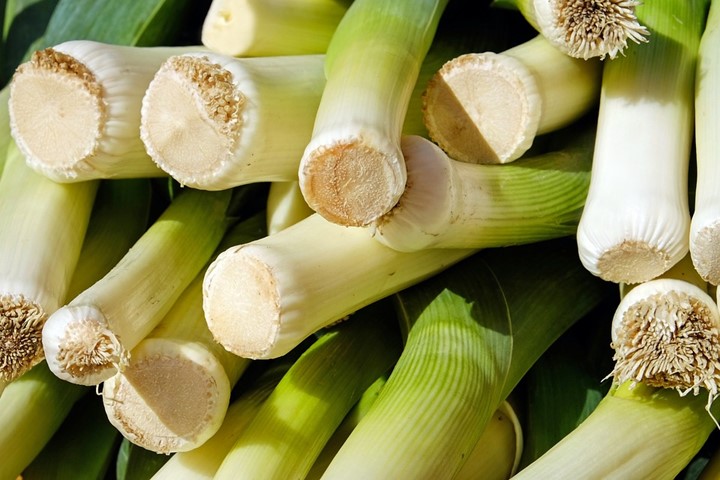 Leek is similar to a large scallion and it is actually a member of the onion family. The best way to define a leek is that it is a vegetable in the Allium and is very closely related to onions, garlic, scallions, and shallots. Although leeks are related to garlic and onions, they are distinctly different, in that, leeks have a mild flavor and a firm texture that works well with rich and creamy dishes such as the potato gratin. It composed of a dense white stalk at its base that leads to flat green leaves that actually spread out at the top. Moreover, leeks can be cooked and served as a side vegetable or in most cases integrated into soups and other cooked dishes.  You can actually eat raw leeks as well but you just need to make sure to use the whitest portion. Not to get me wrong, the entire plant is edible but the white base is commonly used than the green leaves. Leeks are commonly used in soups and stews, as well as chopped in salads or as a garnish.

This member of the onion family has several health benefits. Leeks contain important amounts of the flavonoid antioxidants, which have repeatedly been shown to help protect our blood vessel linings from damage, including damage by overly reactive oxygen molecules. Leeks also improve lipid profile by decreasing cholesterol levels and fatty liver. Now, if you do not have leeks in your kitchen or you just need to find a substitute there are several good alternatives. I must admit! Nothing tastes exactly like leeks, in a pinch you can replace them with other ingredients, but your dish will taste different than if you had used leeks. Moreover, Leek substitutes are relatively easy to get because they are closely related to vegetables. Onions have a much stronger, more pungent flavor than leeks and they work well in most recipes that include leeks as well, because of their similar amount of bulk. We have red, white and yellow onions. Red and white onions are too sharp and closely approximate the flavor of leeks. In cases where the flavor is more important than the volume, Garlic works perfectly as a substitute for leeks. It is important to be careful when mixing the ingredients so that you do not wreak havoc on most recipes. You cannot add the same amount of garlic as leeks. A small amount of chopped or roasted garlic in place of leeks can add a similar flavor and aroma to many dishes. Most individuals refer to shallots as the best possible alternative for leeks. Shallots have a similar delicate texture to properly cooked leeks. Their flavor is mild that we actually do not need to worry about overwhelming the dish. Rich in minerals, vitamins and trace elements; shallots are a wonderful food for a well balanced healthy diet. Shallots share the same antioxidant properties as garlic and the organosulfur compounds they contain, that gives them that distinctive smell, help protect the body against certain types of cancer especially those affecting the digestive tract. Shallots also provide vitamin C and vitamin A, two major vitamins that have multiple health benefits. Shallots are also an excellent source of selenium, a trace element that protects cells against aging and contributes to healthy skin and hair. This is the closest leek alternative when we consider both the flavor and appearance. They are also known as green onions and can be used in place of leeks in garnishes, salads or in any other recipes that call for fresh leeks. They have a stronger onion flavor than leeks but sweet onions are the most commonly available leek alternative. They make an excellent replacement for leeks in stews and soups. Leeks have a milder taste than scallions or onions and when the recipe does not use leeks as the primary ingredient, mild sweet onions or green onions may be used. You can always substitute one-for-one either by weight or volume.

Shallots may lack a hot onion bite but it always adds a slight garlic flavor. In case you have no fresh leeks vegetables handy, you might consider onion powder for leeks in your recipe as well. Leeks, Garlic and onions are the heart of most tasty cuisines and dishes around the world. Hard as it is to imagine, there are individuals who do not take garlic, leeks or onions. Some of them might have allergies or other medical conditions. As for those individuals who avoid the onion family, I would recommend celery as the best alternative.