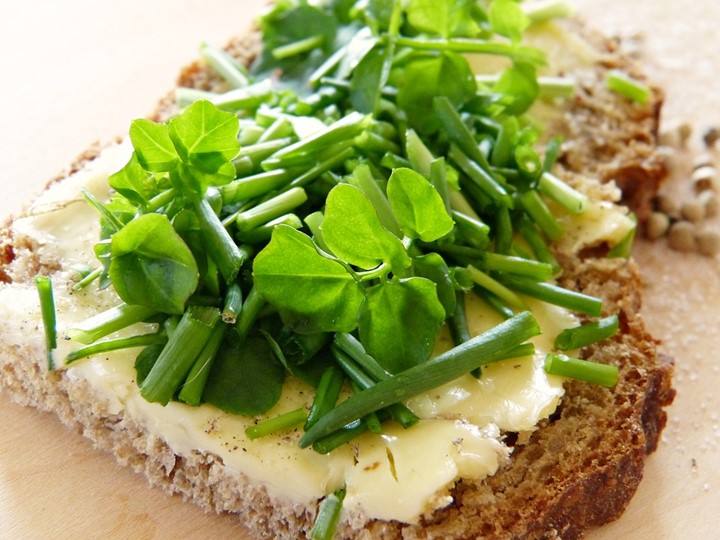 Did you know that watercress is among the oldest plants consumed by human beings? Watercress is a small nutritious green plant and it grows mostly near water bodies naturally. However, farmers grow it hydroponically these days for commercial distribution.

Watercress contains a peppery flavor making it an ideal ingredient for preparing sandwiches, garnishes, and salads. It is not very popular today so if you are having trouble finding it in the market consider the following substitutes for watercress. Arugula is also commonly known as garden rocket or eruca. If you want the same mild flavor like the one from watercress then try this readily available Arugula green. Fully grown leaves offer intense pepperiness similar to watercress compared to the young leaves. But you can use the younger leaves if you’re looking for something milder or use a few grown leaves.

Eating raw Arugula is more nutritious because it provides the body with more isothiocyanates. However, when you cook Arugula slightly your body will absorb more unique nutrients and carotenoids. This green is not only popular for its taste but also the health benefits too.

•    It is a cancer-fighting power food

•    Rich in chlorophyll which prevents DNA and liver damage from aflatoxins.

•    Detoxifies and cleanses the body.

Arugula is a perfect substitute for watercress because it has a similar peppery flavor. Also, it is easy to find this green in the grocery stores. It has a lot of nutritional benefits making it the best choice. You probably love watercress because of the peppery bite right? If it’s unavailable and you want the same flavor use Nasturtium leaves or flowers. It originates from South and Central America as a native to Chile and Peru. In the south and Central America, it’s used as a disinfectant and an expectorant. Amazingly nasturtium name originates from the Latin name for watercress which is Nasturtium officinale. The reason behind this is because of the similarities that the two plants share including the flavor.

Note that Nasturtium as more intense spicy flavor compared to watercress. So use a smaller ratio when preparing your dish. Additionally, if you are more concerned about the physical appearance of your dish consider using the leaves instead of the flowers. Nasturtium flowers are very colorful and they can make your dish more visually striking. Nutritional benefits for Nasturtium include.

•    Vitamin C. it contains antioxidant vitamin C which is important for strengthening the immune system

•    Lutein: Nasturtium contains a high amount of lutein which is good for eye health.

Nasturtium is like a cousin plant to watercress because of the similarities. If you want a more attractive dish you can use the colorful flowers otherwise stick to the leaves. Note that Nasturtium has intense spicy flavor hence it’s advisable to use a puny amount. Radishes, arugula, and watercress belong to the same botanical family. Like the rest of its family radish has a peppery flavor. They are used in Japan as a garnish to pledge tastes to salads. Radish sprouts taste and nutritional value is the ultimate reason why it makes a good watercress substitute. Typically most roots are always colored, unlike the green radish roots. In terms of appearance, you will notice that they are more similar to watercress compared to other substitutes.

They are rich in nutrients such as antioxidants, minerals, and vitamins. Radish sprouts major health benefits include:

Radish sprouts belong to the same plant family as watercress hence they share a lot of similarities. One of them is the peppery taste and flavor. Compared to other substitutes radish sprouts and watercress look more alike.

It’s commonly known as land cress, early yellow rocket or American caress and it’s a close relative of watercress. Upland cress grows in dry soil unlike the watercress which grows in hydroponic gardens, along riverbanks and lakes. It is used as a garnish on sandwiches and also in salads just like its cousin watercress. However, unlike watercress which is quick to wilt and bruises easily land cress holds up better. When you dress the upland cress it will retain its crisp for some time. Upland crest is also less perishable hence it makes a perfect substitute for watercress.

Upland cress has more vitamin A and Vitamin C than broccoli and oranges respectively. It has abundant Iron, vitamin E, antioxidants and calcium too. Main health benefits include:

Upland cress has the same characteristics as watercress. However, it will last longer because it’s not highly perishable. The dandelion plant is common across the world as both its leaves and flowers are highly nutritious. Unlike the other alternatives, dandelion leaves have no peppery bite but it stands up to the heat for a long time. It is easy to find because it grows as a very stubborn weed in the garden or even your lawn. Add a little black pepper to bring the peppery bite to your recipe.

Dandelion is popular for its high medicinal properties. For example:

Dandelion leaves make a great substitute for watercress because it stands up for the heat for a long time. However, it bites like that of watercress. Lastly, it has high medicinal properties does not contain pepper. Spinach adds a great unique taste to salads but it does not taste the same as watercress. To achieve your desired taste add some pepper while using it a substitute for watercress. Alternatively, you can add a few nasturtium leaves to your spinach to enhance the taste.

If spinach is not available use kales and prepares it following the same steps. As you know spinach is highly nutritious and has a ton of health benefits. For example, it is rich in magnesium, iron and calcium. Also helps in:

Spinach is widely available in the market and it can be used as an alternative when you’re out of the above options. However, you need to add some pepper to bring out the same peppery bite as in watercress.